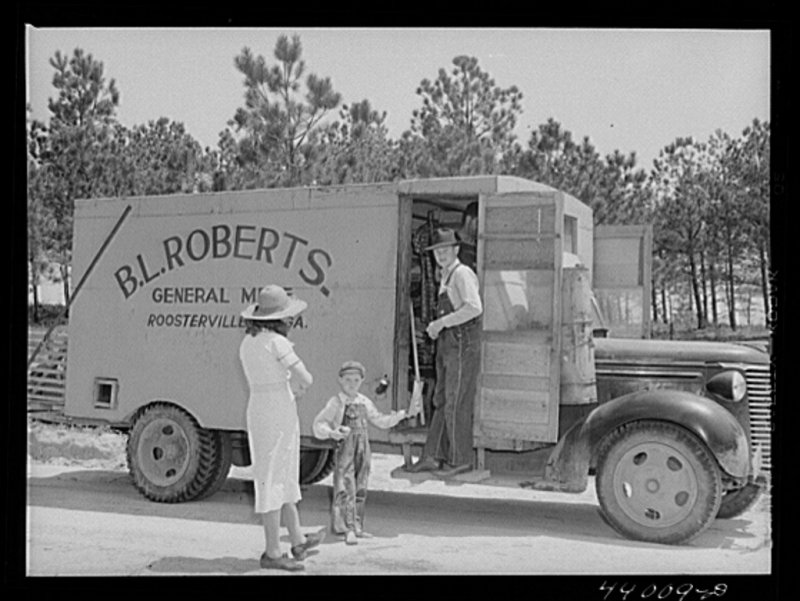 Tuesday marks the 75th birthday of Bob Dylan and there’s no better way to reflect on the past three-quarters of a century of American food-shopping habits than to say “the times they are a’changing.” For the majority of American history, the people of the United States produced most of their food themselves, supplemented by a handful of items purchased on rare trips to the local grocer. But by the time of Dylan’s birth in 1941, less than 18% of Americans were farmers. Pressed by the hardship of the Great Depression, hungry consumers turned to new-fangled self-service supermarkets, which offered a diversity of goods at lower prices, effectively rendering the local grocery obsolete by the 1950s and 1960s. As the decades wore on, these chain supermarkets in turn gave way to big-box stores and to the spread of affordable restaurants, which are where Americans now consume almost half of all of their meals.

And while the nation’s shoppers may continue to roll on like the rolling stones they are, another mode of food shopping too declined. The Rolling Store, once a celebrated fixture in town and country alike, has also been a victim of these dramatically changing times.

A rolling store is exactly what its name suggests. Although mobile vendors have existed since well before the nation’s founding, these vendors were limited by the distance their horses or feet could carry them. That changed with the spread of the diesel engine in the early 20th century. Rural families who lacked access to these mechanized forms of rapid transportation could still only make it into town maybe three or four times in an entire year to do their essential shopping, but now the store could come to them, often in the form of a brightly painted truck or retrofitted bus that would stop at the same places at the same time each week.

Everything was available from a rolling store’s efficiently stocked shelves: fresh fruits and vegetables, bread, canned goods, wheat flour, lard, kerosene and tools, pre-made underwear, overalls, shirts. Come early Spring, the trucks would be stocked with Easter dresses for little girls, and come autumn, that same shelf space would be filled with school supplies for the new academic year. Even with their hodge-podge of goods, these moving stores could easily sell out of everything each time they hit the country roads, which could amount to some 9,000 to 10,000 pounds of goods in a single day.

Many a rolling store’s motto was also “We Buy Anything, We sell Everything,” meaning rural families could also barter with the store, trading “eggs, chickens and pecans” for items like flour, shoes, or chewing tobacco. As a result, in addition to the children’s joyful cries of “Here it comes! Here it comes!” and the honking of the store’s horn, a municipality could often tell if a rolling store was on its way by the cacophony of squawking emanating from the overloaded chicken coops on the top or back of the truck. (This bartering policy also meant that many a child raided their family’s chicken house the morning of the rolling store’s scheduled arrival for an egg or two to exchange for a stick of gum or a piece of candy.)

While the rolling store was essential for the survival of many rural Americans for decades, it wasn’t a terribly difficult enterprise to operate. One larger rolling store company, which had a fleet of nearly half a dozen trucks, employed just seven drivers, two loaders and two bookkeepers. As a result of the simplicity of such operations, the overhead costs of these mobile businesses was often much lower than those at an actual brick-and-mortar grocery store. This meant rolling stores could offer their clients much lower food prices, up to 25 to 30% less in some instances.

In fact, rolling stores were established in the 1910s in New York City—even though residents there had no trouble getting to shops—precisely because of their ability to lower the cost of food in the increasingly expensive metropolis. By 1919, 96 of these rolling stores were meandering around the city with the message “We are here to reduce the high cost of living” written in red paint on their sides. As in the country, these stores would sell out of everything on each trip and at times the crowds around the stores would become so large and unruly that the police had to be called in to control the boisterous mob of bargain hunters.

While those who grew up running to greet the drivers of rolling stores remember these enterprises with great fondness, these endeavors could not withstand the rise of the personal automobile and the rapid proliferation of large and affordable chain groceries. As early as the 1960s, the rolling store had been dubbed a “diminishing breed.”

By the end of the 20th century, the large numbers of families that once depended on rolling stores for their daily goods dwindled, until most of the customers who were left were the housebound infirm and the elderly. (A few more agile hangers-on, however, continued to purchase from the rolling store simply because they liked it.)

While American shopping habits may constantly change, “meals on wheels” is an idea that will never be old-fashioned. And although today’s food truck rallies may not include racks of Easter dresses, these vendors still carry on the time-honored tradition of bringing the food to the people. So the next time you hear the tunes of an ice cream truck blowin’ in the wind, think not just of your favorite flavor but also of the great legacy of the rolling store and all the men and women who have brought Americans delicious food straight to their doors for decades.

Emelyn Rude is a food historian and the author of Tastes Like Chicken, available in August of 2016.